Earlier this year, I was approached by the lovely people at Sainsburys Magazine in regards to a feature on spice inspired recipes for the Summer barbeque season for their July issue. I decided to write a recipe inspired from my Punjabi roots and created a Barbeque Masala Chicken recipe that is packed full of flavour and spice and is great cooked on the barbeque or on the grill. This recipe features a marinade made from yoghurt, fragrant Indian spices and pureed deep fried golden onion to add delicious depth. Sound like your kind of thing? Then, check out the recipe below. I also made a recipe for a simple yet satisfying Indian salsa made from radish and red onions which is refreshing and light and serves as a great accompaniment to the spicy masala chicken.

I am delighted to announce that my recipe was featured on the front cover of the magazine which I am thrilled about! The feature also included mouth watering recipes by last years Masterchef winner Shelina Permalloo, Private Chef and Indian food writer, Maunika Gowardhan and Persian food writer and Supper Club host, Sabrina Ghayour so be sure to grab yourself a copy of this month’s issue!

The sun is supposed to be making an appearance this weekend so all the more reason to haul out the BBQ and get grilling. Check out my recipe below and facebook or tweet me your thoughts.

1) Pour the oil into a wok so it’s 3-4 cms deep and heat. Deep fry the onions on a medium-high heat for 6/7 minutes or until they  turn golden brown. Turn off the heat and leave to cook until fully golden. Remove from oil using a slotted spoon and drain on kitchen paper. Leave to cool.
2) Put the onions, olive oil, lime juice, ginger, garlic, green chilli, tomato puree and coriander into a food processor. Blitz until thick paste forms and transfer to a mixing bowl.
3) Stir in the yoghurt, paprika, turmeric, garam masala and sea salt.
4) Add the chicken breasts and turn in the marinade until well coated. Cover and chill for at least 2 hours.
5) Light the barbeque. For the salsa, put the radishes, tomatoes, onion, black pepper, lime juice and coriander in a bowl. Season with salt to taste and toss together.
6) Barbeque the chicken for 20-25 minutes, turning regularly, until cooked through. Serve with  the Indian salsa.

This site uses Akismet to reduce spam. Learn how your comment data is processed.

PUNJABI PAKORA KADHI! It's what I am teaching how

Hosting back to back cookery classes on the hottes

Big smiles all round today as I have announced The

Quite possibly one of my favourite Shikshak.co.uk

PUNJABI MALAI CHICKEN & CHAPATIS. It's what I am t

There has been a problem with your Instagram Feed. 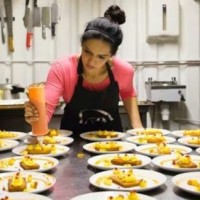